After a massive multi-day effort, our team found one of those rare bugs that turned out to be an issue deep in the compiler. My colleague Agnes took the lead to track down the issue and wrote up her findings about her adventures.

Now that the issue is fixed and the hard work is done, I can step in and do a little post-mortem. 🔎 What was the problem? What was the fix? What did we learn?

The classic article “Smashing the Stack for Fun and Profit” from 1996 outlines a technique to execute arbitrary (and possibly malicious) code via a program that doesn’t do proper bounds checking. In the 20 years since, operating systems and programmers have become much more clever about stopping these exploits.

Sometimes though we’re our own worst enemies — reading past the last element of an array or an off-by-one error that writes past the end of a buffer is as easy to do as it was 20 years ago.

In our case, we were getting heap corruption errors, meaning something was accessing memory it shouldn’t be accessing. But Swift is a safe language, isn’t it? How was this possible?

To get to the root cause, we first need to understand two concepts: memory layout, and tail allocation.

When instances are laid out in memory, there are several numbers to consider:

Size is the number of bytes to read so you have all the useful information.

Stride is the distance between two values. If you have a contiguous array of items, the stride is the number of bytes to advance to reach the next value.

If you want a longer discussion and more examples of memory layout, check out my article about Size, Stride, and Alignment in Swift.

Do you remember tagged pointers from the Objective-C days? The idea was: why spin up an entire object just to hold something like an NSNumber containing a boolean? A boolean is a single bit, after all.

So on a 64-bit system, a pointer to an object takes 64-bits. But forget the pointer, we could store entire values with room to spare in 64 bits. Booleans, integers, even short strings could fit. 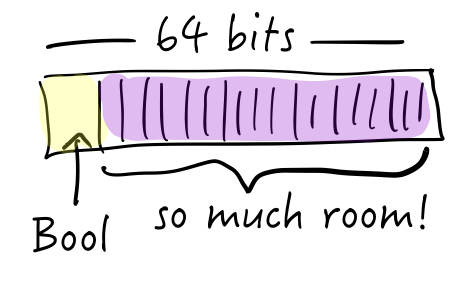 It’s a size optimization — although we could in theory address 264 bytes of memory (that’s 18 exabytes, or a 18 million terabytes), that’s overkill, isn’t it? Why not use a few bits for flags, leave enough space to address memory, and then you can support features like tagged pointers.

Similarly, when you allocate something like an array or dictionary in Swift you get a little extra space at the end.

Sometimes this is due to alignment: since the next thing in memory needs to spaced out a bit more, why not use that blank space “between” size and stride? Other times, the system might reserve a little extra space for expansion so you don’t need to do an expensive re-allocation and copy later. This extra space is the tail allocation.

Thanks to Karoly Lorentey for explaining tail allocation to me via Twitter.

Now, on with the story.

Let’s say you want an array in Swift. The runtime goes ahead and allocates some space, and also adds on some tail-allocated space. Here’s the method that does the work:

In practice, the system might add enough space for a few extra elements rather than just the “rounded up” space due to alignment.

So, let’s say we have a array. We allocate enough space for some values:

Then the compiler helpfully adds on tail-allocated storage, enough to hold an additional value:

Now here’s the kicker: in our app, we’re storing values of double3 type. A double3 has a size and alignment of 32 bytes. But a 32-byte type will certainly fit in the tail-allocated space:

But it may not be aligned properly. At runtime, if the array decides to use its tail-allocated space it will also make sure to write that value to a 32-byte alignment boundary:

The tail-allocated size is sufficient, but the system didn’t take alignment into account. The alignment boundary we need is not at the start of the tail allocation.

Alignment All the Way Down

What were the problems and solution here? Two things:

A big round of thanks to Erik Eckstein, Arnold Schwaighofer, Mike Ash, and Jordan Rose for their work and reviews on the two pull requests.

I’m not a compiler engineer and I don’t know all the details about this bug, but I’m a firm believer in the value of reading code — especially code you don’t understand yet.

Agnes wrote a great summary of her lessons learned while tracking down this bug; what things can I add after digging a bit more into this problem?

Although it was tough work to track down this bug, I had a fun time doing a little digging after the fact on the cause and fix. I’m super impressed at how quickly it was fixed in the compiler and now look forward to the months ahead of a completely bug-free system. 😉

Thanks to my colleagues Agnes and Alexis for their help reviewing this article. All remaining errors are of course intentional and meant to test your attention. 😜

If you have questions or feedback for me, you can get in touch via Twitter where I’m @gregheo. If you’re interested in working with us — we’re hiring, and looking for an expert iOS developer. You could be working on the future of AR on iOS and writing about it on this fine company engineering blog!